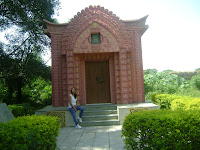 While, we were Cambodian Buddhist Monastery, Mr. Vijay Pal, my friend at Gurgaon/Dehli informed me that 'Ashoka Mission' is not far away from this location. You must visit that also.Mr. Vijay Pal is Assistence professor in Delhi public College. He is Dalit activist.
We headed for Ashoka Mission. At Meharauli, if you are new, it would be very difficult to find this place. During entering you sometimes feel awkwardness. No body is there to assist you. 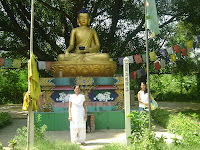 We, I means myself, wife and my daughter Prenana were wandering here and there. At one place perhaps residential, we find some one there. A young boy came on door and asked for what we are looking ? We told him that we had heard lot of about this place. That is why we came here. Would you tell something ? He told that Lamba ji right now no here. He is out side. He went Sanchi (M.P) for attending a Buddhist function.
At once, Sanchi flashed in my mind. It was in news head lines since a few days. M.P. chief minister Mr. Chauhan is going to eshtablish a University having Buddhist Chair. I don't know what is the politics behind this but South Indian Tamil Group's tension on attending this function by Shri Lanka President, this news was flashing on Print and TV channels.
He had no any further mater what we want to know. We passed half an hour there, but it was pleasing time . We relaxed there. 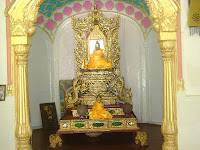 Ashoka Mission Vihar was founded by Cambodian Monk Ven. Dharmavara Mahathera in 1948. He was a highly educated personality. Being impressed with his personality, the Indian first Prime Minister Pt. Jawaharlal Nehru had given him a piece of land in Mehrauli at South Delhi. Bhante opened Ashoka Mission there to convey the massage of Lord Buddha to the heart of Indian masses.Ven. Dharmavara Mahathera  had left for USA in 1975 and since then, Ven Lama Labzang came in leading role for this project.

Ven Lamba Lamzang, well known personality belongs to Ladakh. Ladakhi and other Himalayan region people are indebted to him as Lamba ji have been doing great service to them.The pateints of this region who are suffered with cancer like disease, he bring them AIIMS and other Hospital, free of cost under Medicare. 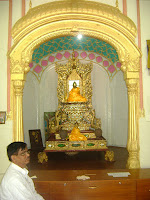 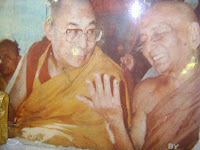 India is the birth place of Buddhism, the Dhamma that gave to the world the profound teaching of non-violence, compassion and wisdom. Lamba ji is conveying the Buddha teaching through serving needy people.


The campus is spreaded over an area of about 12.5 Acres. Greenery is surrounded there with trees of different varieties. A big Buddha statue is installed there under a Pipal tree. Having seat in Padmasana Loard Buddha appears gaving a massage to the visitor that world is like this Vihara and you have to flourish it what you desire. It was told that the then President of Myanmar, U Nu had planted the Bodhi tree in the prmises in 1953.
It was told that Buddha Purniam is being celebrated here regularly in addition to other  functions. Ashoka Mission apart from running Meditation centres and other welfare social activities, its research wing is act as  'Centre for studies in Transnational Buddhism and Civilizations. 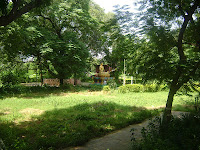 'Hemalyan Research Centre for high altitude Diseases' is running here in the guidance of Lama Lobzang, which is the lifeline for Ladakh people.
First International conference was organized here during March 2003/Feb 2006 to highlight the heritage of Nalanda, the contribution as a seat of learning to the world.

The look of Buddhist Shrine is unique and unparalleled amongst Indian Buddhist Monasteries.